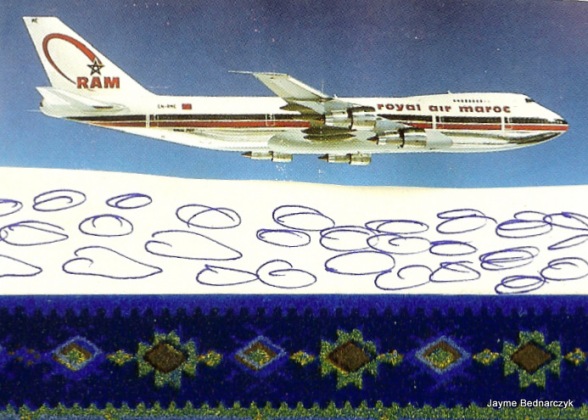 The plane circled, making its ascent—my face fused to the glass. The patchwork of colors changed from bright greens and yellows and browns to muted versions of this spectrum—then a tapestry an ombré of browns.

Approaching Marrakesh the landscape turned into a rich oasis of greens.  In my head swirled the lyrics of Crosby Stills and Nash’s song Marrakesh Express watching the view unfold.

Then just as quickly the beautiful peaks of the High Atlas Mountains were under us;  if the window opened I’m sure I could reach them with outstretched finger tip—snow capped and crusted from extreme winds.

The mountains morphed into crusty plateaus as we approached the barren craters.

Beginning our descent I thought, “Are we landing on the moon?”

Circling again we dropped toward the lunarlike surface.  Squinting now I could make out small ribbons of roads as they revealed themselves—puffs of dust following a vehicle as it bounced and fell over the unpaved  rocky stretches— connecting villages’ rising organically out of the earth. The craters revealed themselves as spaces between the buildings made from local mud and straw.

As the wheels bounced heavily on the tarmac, my face un-suctioned from my window with a faint sucking sound I hoped no one else had heard—leaving a red patch, another bounce and my nose hit the plastic bit on the pull down shade, I was home for the next few months—a world of beige intrigue—Ouarzazate (pronounced: Waa-zaa-zate)—at the edge of the Sahara.  I was ready for an adventure. That bump would not me my last.

Leading an EntwindeLife on the edge of the Sahara.