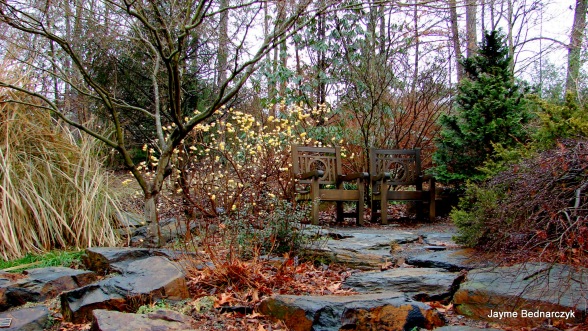 There are certain plants that one encounters which stop you in your tracks… so begins Lust and Envy in the garden.  Edgeworthia – a woody Native of Japan, China & Nepal – has been my plant fetish, for over 13 years.

Edgeworthia near the Asian Garden at Sarah B. Duke Gardens

I am not sure where I first saw  Edgeworthia chrysantha –  Rice Paper Plant.   There are several forms in multiple gardens at JC Raulston Arboretum.

But one must be out in the winter garden to experience.    That “heart be still” moment… was at least thirteen years ago on my first late February visit to Pine Knot Farms in Virginia in search of Hellebores… I fell hard!

Cleverly growing out of a terracotta drain pipe near a walkway – the hypnotic scent an inexplicable delight.  Creamy yellow pompons dangling in the air so unexpected, charming and exotic – you had me at your scent!

Pine Knot Farms… Love at first sight… now a little large for the terracotta drain, but I’d be afraid to move… it is a Daphne relative!

I’ve noticed that every great garden – zones 7b to 10b since – has at least one,  so should Entwined Gardens !

Rice paper plant begins to entice in the late fall, after the striptease of leaf drop. Tiny cream buds turn into an ornamental sphere shaped sputnik fleurettes which dangle and dazzle visitors… hanging tight like Sandra Bullock in Gravity through anything winter throws at it… always a curiosity in the winter garden.

Then, by mid-winter, it bursts forth with the most seductive scent.  Which is why you reach in to your pocket and hope you haven’t spent the gas money needed to get home after traveling far and wide to find it! 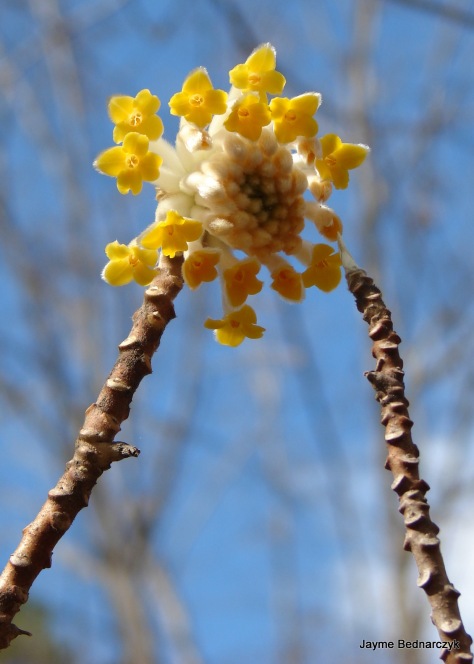 When the seduction that lasts weeks then fades like any romance, the plant sends up it’s beautiful leathery slender ovate shaped blue green leaves and becomes a most wonderful filler plant in the woodland garden.

Edgeworthia gives good reason and show – to long for the winter and then enjoy all year long.

Then heartbreak when it ups and croaks – well it is related to Daphne… so the process begins again –  Love turns into Lust and Envy in the garden.

Many plant enthusiasts say you must try a plant at least 3 times before giving up….   Yikes, that can be expensive!  Most of those folks are in the plant propagation and selling business!

My first Edgeworthia conquest grew in a pot for about a year.   No blooms the first year… OK it happens… the plant likes to settle in and expand roots, which can be expected.   I even found a terracotta drain/planter to raise it up while it got some growth on it,  emulating the one at Pine Knot Farms.  Imitation is flattery, so they say.  By raising it up, I could see naked twigs  a distance out my bedroom and living room windows… its wafting come hither scent would lure me into the winter garden with abandon I daydreamed.  I would be wearing yellow chiffon…  although planted in fancy bagged soil, I fear it did not get the appropriate moisture being in terracotta.

A year later it croaked.   I was sad but undeterred… The diaphanous chiffon dress is back in storage.

I bought another one from the JC Raulston Arboretum… this one – Edgeworthia papyrifera, I planted outside my kitchen window in a raised bed to lift my spirits during the winter months.  It didn’t bloom the first year, two tiny shoots sprung up and I was delighted… then deer munched them all down one night, and the plant never recovered.

Again I sprung for an Edgeworthia chrysantha ‘Winter Gold’ from another plant sale.  Planted it again in the raised bed outside my window.   In four years it has remained a single stick.  No buds.   Just the delight of two leaves every year… talk of an unusual plant!  I will say  I defiantly wanted to see it out our  kitchen window to cheer me up in winter, but the packed clay no matter how much I add amendments becomes strangled by the Oak Trees. 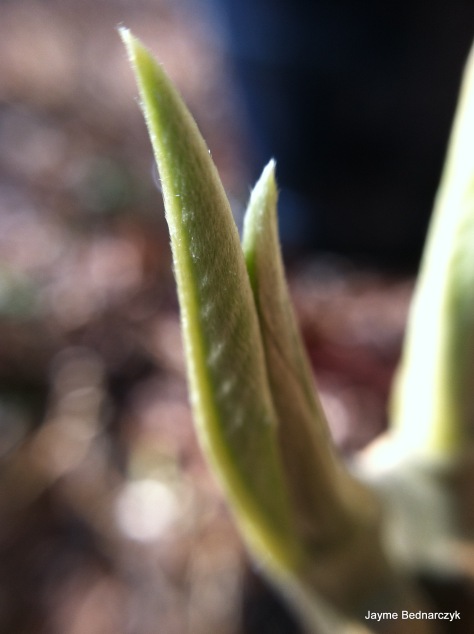 Not the response I would have had – after just enjoying  crab cakes with the good silver for luncheon…. beat   snotty raised eyebrows,  not the lustful look of an informed gardener,

“That looks DEAaaD. Y’all got any Azaleas or Camellias?”

Hasn’t she drunk the Mark Weathington punch “Life is Too Short for Boring Plants!”

Note to self: Next time serve her  pimento cheese sandwiches and only use stainless.  Or better yet – just invite Mark over for luncheon!

I am not giving up… I do have another miniscule side shoot this year.  I spray it with “I Must Garden” to deter any deer munching.  They even munched a spiny Ruscus recently!

Then I saw it at Homewood Nursery, an end of the year closeout sale… even with “Plant Bucks” – it was more than I would normally spend… the coveted Edgeworthia akebono “Red Dragon” –  Orange/Red Blooms, perhaps not as much scent, but that tartish color enough to make one blush atop those naked stems. I really couldn’t believe there were three to choose from!

Two years later it croaked, planted near a wall and a walkway with great drainage in morning sun… heartbroken.  My friend Beth bought one of the three and her’s went tennis shoes up too.  Misery loves company.

But friend Amelia’s specimen is as stunning as I had imagined.

Lust and Envy curled through my veins once again this past early spring when I spied it in her garden.  Summoning a “come hither” look to find me stepping gingerly off Amelia’s well manicured paths to be enveloped in light scent and geisha like intrigue… more about plant obsession to come….

Two years ago, I visited my friend Jere garden.  Jere’s Edgeworthia grows bawdily on a slope near a lake happily as swans & ducks drift bye above and giant carp below in the cool water.  Here and there a turtle pops up its head…  a lovely garden for relaxing.

After hearing of my pitiful ability to grow Edgeworthia,   OK – I was lamenting even whining… Jere  simply bent over, and with a flick of a wrist, twisted out a few stems with long roots and handed them to me…  I had no idea it was that easy!  Jere – I am forever grateful.

Grateful to Jere – for taking pity on me.    I even gave one of the treasured rooted stems away to a neighbor to appease the plant gods…  I am happy to report I now have sticks with buds in the ground in two locations!

I yearn for the morning when I open the front door and am hypnotically drawn across the driveway to basque in the scent and delight… I will honestly feel that I do have a patient nature, no matter what my husband thinks, and Entwined Gardens indeed has joined the ranks of a great garden! 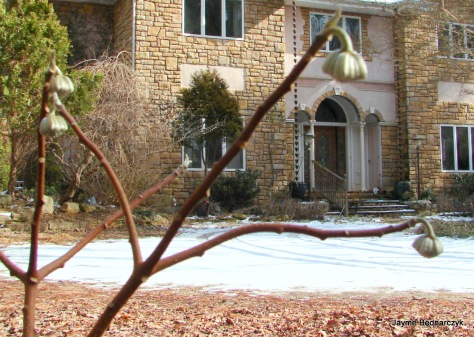 8 thoughts on “Lust and Envy in the Garden – Edgworthia”

finding joy in the journey

The Art and Craft of Blogging

"A garden that pleases me is a garden...designed with deliberation" - David Hicks

The beautiful picture of angels makes you happy.